I know, I never update. I never feel like I have anything of substance to say. So the first update in a year is of a new kitty!

His current name is Rascal. Rascal is the name he came with and I can't think of a good Hallowe'en name for him, so Rascal he'll probably remain. I'm told he was named for his personality. (With the exception of Spook, I know lots about each litter of all of my pets, and I've picked the troublemaker in each litter...there's just something about them that draws me, even from pictures. :) )

And speaking of pictures, here are a few of him: 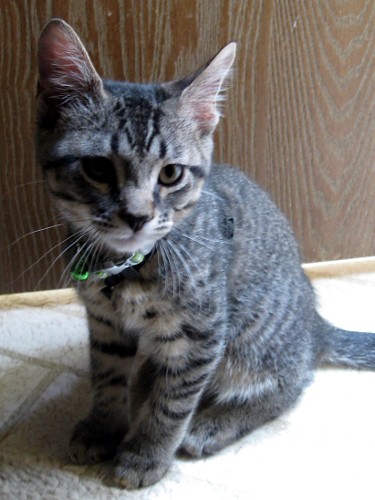 His reception went almost as I predicted. Boo hissed at him and hid. Spook hissed/growled and then had a 15 minute staring match. Winter cried and barked inconsolably for an hour (during which he got 4 bloody noses and a bloody tongue (and that's with being held back), ate a bowl of kitten chow, and brought 3 cat toys out of the bathroom (where Rascal will live until I trust everyone enough for him to be loose without supervision) for Rascal - though Rascal wants nothing to do with the loud, drool-y, overly-excited dog, can't say I blame him). I finally crated him in the basement.And he and Summ sniffed noses through her crate and the baby gate, before she took off for the bathroom (accidentally stepping on him in the process) and stuffed as many toys of his in her mouth as she could (6) and made a beeline for outside. (My prediction was that he'd get a cold reception from Spook and Boo, an overly enthusiastic reception from Winter, and a predatory reaction from Summ. I'm pleased to be wrong on that last account, though still no unsupervised interaction.)

My neighborhood had its big yard sale today, and Rascal was quite content to be carried (on leash) around to all of the different yard and get pets from about 20 different people. Only stopped purring once, and that was when a loud dump truck barreled down the street. And he was just as good in PetsMart. Just sweet, attached to my clothes with his claws, and purring away. He was nervous, but well behaved.

He's big for 12 weeks. My friend, M, who rescued their mother a few weeks before the litter was born, was at the vet with me (in fact, that's where we did the ownership transfer, because he had to test negative for FIV/FeLV for me to consider keeping him), and my vet kept asking if M was sure on their birth date, because he's already 4.3 pounds and maturity-wise is closer to 16 weeks, but M is sure of their birthday, as they were born while she was a her mother's birthday party. I'm happy about that, because his size makes him less fragile and less vulnerable to damage from the dogs. His paws are bigger than Boo's, so I get the feeling he's going to be one big cat.
Collapse